Getting Somewhere, and a Mild Rant

The Covid test I mentioned last time was negative. But 4 weeks ago I had another test, just on a vague feeling, and that one was positive. So it’s been a tricky few weeks. I’ll maybe write an entire entry on this.

On the model: I’ve been fitting it in amongst paid work, so progress is slower than I’d like.

I’ve been doing ‘Legacy Means-Tested Benefits’ - Pension Credit, Working Tax Credit and the like. It’s been a chore. I haven’t worked on this stuff in many years and I was shocked at how complicated it all was. One problem is that the main reference, the Child Poverty Action Group’s Welfare Right’s Handbook is - sorry to say this - an incoherent mess. It’s enormous. Here’s a comparison between an old 86/87 CPAG guide I have from my IFS days, and the 2019/20 version I’ve been using for reference: 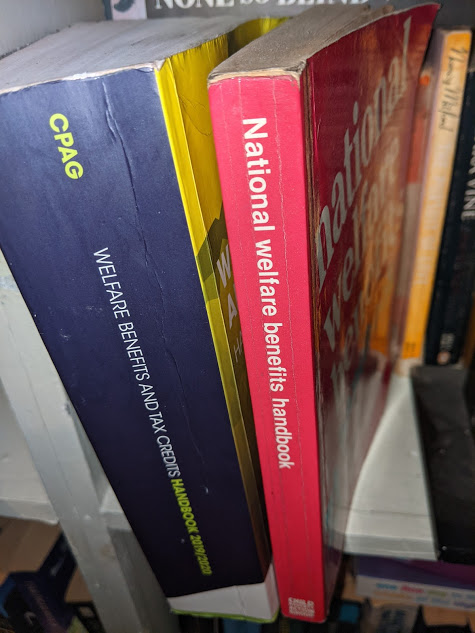 1,847 pages vs 252. The welfare system has clearly got more much complicated since the 80s, and currently there are two means-tested systems running in parallel - Universal Credit and the old benefits.

But a lot of the increase is down to the sheer amount of repitition in the current Guide. And information is scattered around. I’ve always been a huge admirer of the CPAG, back from when I first started working on this stuff in the ’80s, so it pains me to say this.

The code I’ve written follows the CPAG stucture probably too closely - so a section trying to route people to the correct benefit, then a section on incomes, then allowances. Probably neater just to have a complete model of each benefit.

The CPAG book has very few worked examples, so creating unit tests is tricky. I guess they want to keep worked examples for the courses they sell. The tests I have so far are not at all where I’d want them to be. I’ve spent a good deal of time on various benefit calculators generating a spreadsheet of test cases. Next step is to convert these to unit tests. These calculators are such black-boxes that this will be tedious since I don’t know the exact assumptions they are using.

I only really nailed the income tax/ni parts of this model when I discovered the Melville Book and there must be a market for something roughly similar for the benefit system.